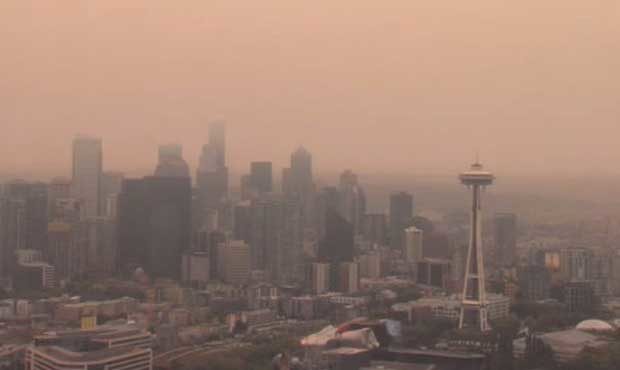 The Cascadia Wildfire and Urban Smoke Working Group has more than 70 participants representing seven universities across the Portland, Seattle and Vancouver metropolitan areas, in addition to government agencies, companies and nonprofits including the US Forest Service, the BC Wildfire Service, The Nature Conservancy, and Microsoft.

The working group was launched in summer 2019 as a pilot research collaboration of the Cascadia Innovation Corridor initiative. A panel discussion was held at the fourth annual Cascadia Innovation Corridor Conference in Seattle in fall 2019 with Michael Brauer from UBC, Julie Padowski from WSU, Ryan Haugo from The Nature Conservancy, Sim Larkin from the U.S. Forest Service, and Jonathan Fink from UBC and PSU. The session illustrated the potential for implementing joint research and policy agendas at universities across the region, and the value of incorporating binational and multi-sector perspectives on issues related to wildfire and urban smoke.

To replace a conference originally planned for this spring, the working group is hosting informational weekly webinars, usually held on Wednesdays at 1pm PST. Webinar recordings, beginning April 1, can be found on their website.

The research topics are especially pertinent as wildfire smoke has the potential to exacerbate the COVID-19 pandemic this summer. On April 8, Sarah Henderson of the BC Centre for Disease Control presented estimations that an extreme wildfire season could cause a 20-30% increase in confirmed cases and deaths from COVID-19 this summer. The estimations were generated by combining data on the COVID-19 outbreak in Washington from late February to mid-March 2020 with air quality data in King County in summer 2018, during an extreme wildfire season. Her research is based in part on linkages between air pollution and higher rates of SARS-related fatalities during the 2003 epidemic in China, and a study on the relationship between influenza hospital admissions and source-specific particulate matter, especially biomass burning, in New York. An editorial on her findings is under review by the American Journal of Public Health.

On April 27, UBC professor Michael Brauer, an affiliate of the Cascadia Urban Analytics Cooperative (CUAC), discussed his research on the public health effects of wildfire smoke over several decades. This began with his work to mitigate the health impacts of wildfire smoke conditions in Malaysia, where he spent a month in 1997. Data at the time showed a link between increased concentrations of particulate matter and respiratory visits to hospitals; and a decline in children’s lung function during the period of haze, with indications of long-term damage a year later. Michael presented another study on an extreme fire season in BC in 2003 that showed 50% more respiratory physician visits than normal. He expressed concern as well over the mental health impacts that he and others have observed during smoke incidents, such as feelings of lack of control or having nowhere to go to escape seemingly apocalyptic conditions, exacerbated by reduced visibility of mountains, sun and clouds. He noted these impacts could increase this summer if extreme smoke returns, due to existing stressors from the virus outbreak and isolation.

The next webinar takes place on May 6 with Len Garis, an adjunct professor at the University of the Fraser Valley and retired Fire Chief for the City of Surrey, and Kim Anderson, professor of Agricultural & Life Sciences at OSU. For more information, contact Jonathan Fink, co-director of CUAC, at jon.fink@pdx.edu.